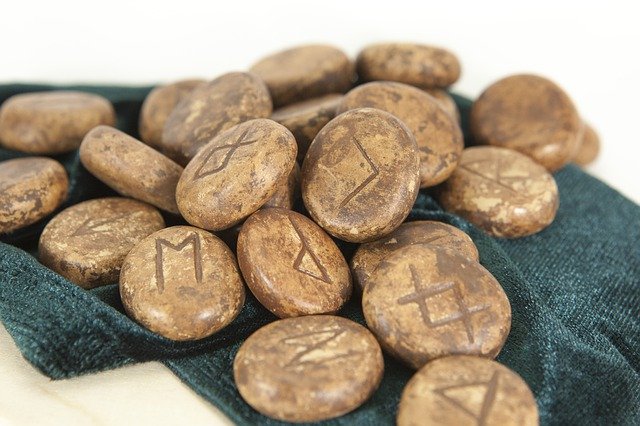 Runes are an alphabetic script used by the people of Northern Europe from the first century into the middle Ages. In addition to their use as a written alphabet, the runes serve as a system of symbols used for divination. As the Roman alphabets became the preferred script of most of Europe the Runes were no longer used, but their forms and meanings were preserved in inscriptions and manuscripts. They are now used as a popular alternative in divination to Tarot cards, crystals and so on but they are also frequently used alongside these other tools and in some cases they are combined. Many Tarot decks carry Runic symbols as well and there are “crossover” meanings of sorts.

The main thing which distinguishes a runic alphabet from any other alphabets is that each letter, or rune, has a meaning. For example, whereas "ay", "bee", and "cee" are meaningless sounds in our alphabet, the names of the first three runes, "fehu", "uruz", and "þurisaz" are also words in Germanic language, meaning "cattle", "aurochs", and "giant", respectively.

Runes also have magical significance as well, and so the simple process of writing becomes a magical practice or spell. These days the runes have been rediscovered as a symbolic system of divination and have a large following. Like the Tarot cards they are known to be extremely powerful and effective in divination and magical work, as if their symbolic energy can awaken the old spirits. They are much more than an alternative for telling fortunes. They provide a key to understanding the lives and beliefs of the ancient people who created them and their spiritual lives too.

The Runic symbols can be used in many forms in divination, on wooden sticks (birch) or stones or even on crystals. I use them on blue obsidian and the crystal gives them extra energy!

What we now know as the runic alphabet seems to have developed from two sources - one magical, one literate. Pre-runic symbols, or hällristningar, have been found in various Bronze Age rock carvings, in Sweden. Some of these symbols are readily identifiable in the later alphabets, while others represent ideas and concepts, which were incorporated into the names of the runes like “Sun” “Horse” etc. The exact meanings of these sigils are now lost in the mists, as is their original purpose, but they are believed to have been used for divination, and it is fairly certain that they contributed to the function of the later runic alphabets.

There is some disagreement about the origin of the "alphabet" aspect of the runes. Cases have been made for both Greek and Latin derivation. However, the strongest evidence still seems to point to a North Italic origin. The similarity between the two alphabets is too close to be ignored. This would also explain why so many of the runes resemble Roman letters, since both Italic and Latin scripts are derived from the Etruscan alphabet (itself a branch of the Western Greek family of alphabets).

Very often before the reader does a Rune “cast” a prayer to the Norse God Odin will be said as the Runes are linked to him. In legend he hung from the tree of life in order to win the right to use the Runes for divination thus giving him insight into his future battles and adventures! Nowadays a Rune cast is more likely to cover romance, money and spiritual development than the battles and adventures of a legendary God! (Though some people seem to think they are Gods!) You may be asked to throw them or grab them from a bag in a divination but I doubt you’ll be asked to hang from a tree…unless you meet a very strange diviner (even stranger than me!).